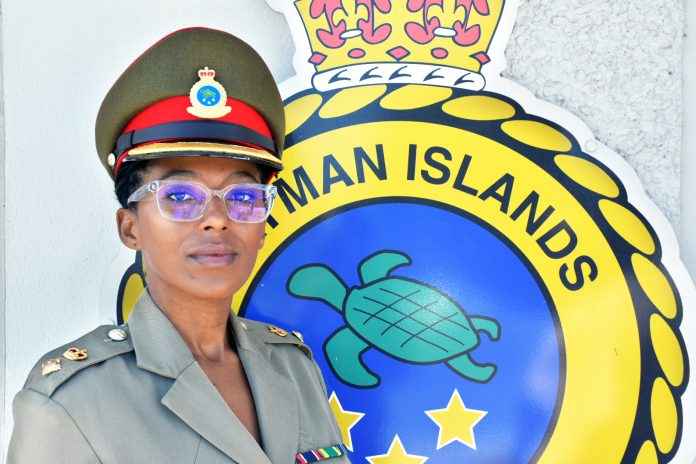 “We are most definitely excited about it,” said Bobeth O’Garro, who has been commandant for the corps for 11 years. “Everyone’s speaking about the contribution we could make. It’s a great opportunity to demonstrate the skills we already have.”

UK Minister of State for the Armed Forces Mark Lancaster, along with Governor Martyn Roper and Premier Alden McLaughlin, announced plans for the Cayman regiment at a press conference Friday. Lancaster said the unit would be a cooperative venture between Cayman and the UK, with the latter providing training and equipment.

O’Garro said she thinks the establishment of a regiment will provide a valuable resource to Cayman and the region when it comes to disaster response. She expects it will also generate more interest in the Cadet Corps, which trains young people, 12-17, in military discipline and skills.

Currently, she said, there are few opportunities for the approximately 150 corps members to pursue any kind of military vocation. Some cadets go on to serve in the police force, the fire department or the prison system. Only one that she knows of became a member of the UK Armed Forces.

She’s hoping that opening up a partnership with the UK would allow an avenue for cadets who are interested to attend the British military academy.

Although it is envisioned as a reserve organisation, the regiment itself will also provide an outlet, she said. “When the regiment is recruiting, they’ll be looking for people with some skills already.”

She expects the corps might also benefit from sharing some of the regiment resources, such as facilities and equipment. The equipment the UK might be providing, she said, won’t be tanks and missile launchers, but more like uniforms and materials.

Having a centralised space for both the regiment and the corps where resources could be shared only makes sense, O’Garro said.

She thinks it also makes sense to strengthen Cayman’s ability to help itself and others in the aftermath of hurricanes or other disasters.

“It really is about capacity building,” she said of the regiment. “This can only add to our capacity as a nation. It takes it a notch higher.”