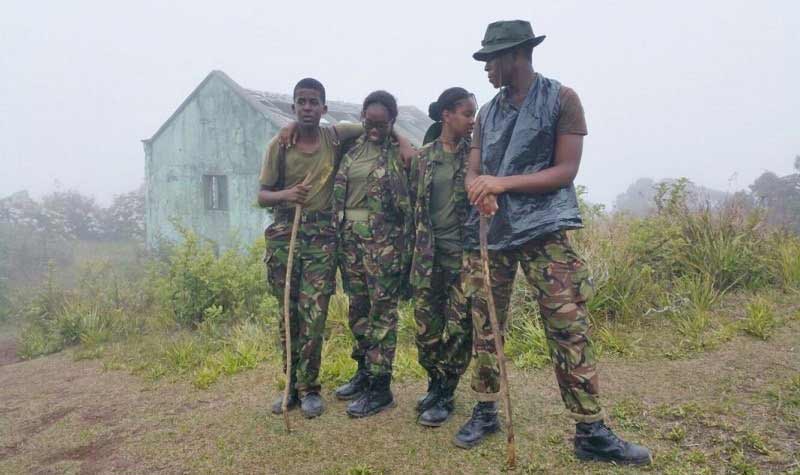 Young people participating in the cadet program at Clifton Hunter High School in North Side are impressing teachers with their personal development this school year.

“Since the start of the school year, teachers have noticed a huge difference in the kids who became involved in the cadet program this year, said Clifton Hunter High School English and literacy teacher and the school detachment Second in Command, Second Lt. Dean Brown-Richmond. The Detachment Commander is Lt. Wilston Bennett.

“They are telling us they have seen a change in behavior, where the students are demonstrating respect for authority, discipline and leadership like never before, she said.

Ms. Brown-Richmond said the draw for students to join the cadet detachment is the opportunity to take part in a wide variety of activities that offer personal development, building military and other skills, and also contributing to the community.

“Some kids are drawn by an interest in the military lifestyle, and others like the chance to build skills that have real-life applications that benefit society, like search and rescue training, she said.

“By taking part in the cadet program the kids also see the value of the rank structure where they have to carry out orders, in the knowledge that over time it will be their turn and they too will be responsible for making decisions, and this builds their self-confidence and personal discipline.

The students commit to attending one after-school session per week at CHHS, plus a half-day session on Saturdays at John Gray High School alongside cadets from Cayman’s other detachments, giving them the chance to interact with students from other schools and districts.

In return, Ms. Brown-Richmond says they get to take part in numerous activities that expose them to new skills, like swimming and climbing, academic exercises through classes and written tests, and new friends.

Over the summer, the CHHS cadets joined other cadets from the Cayman Islands Cadet Corps on an adventure of a lifetime during a trip to Jamaica.

On the trip, which took place from July 11-25, the cadets took part in activities and adventures testing their physical abilities and fitness, with a major highlight being hiking to the summit of the country’s famous Blue Mountain Peak, Jamaica’s highest point, with an elevation of 2,256 meters (7,402 feet).

The CICC joined the Second and Fifth Battalions of the Jamaica combined Cadet Corps on their joint expedition camp. The base camp was located at the Mavis Bank High School at the foothills of Jamaica’s Blue and John Crow Mountains National Park, a UNESCO World Heritage Site.

Among their activities the cadets took an excursion across five parishes to YS Falls in St. Elizabeth, and visited the historic Devon House in St. Andrew. At base camp they got the chance to use field craft survival skills, as well as leadership and critical thinking skills learned from the various courses they had been taught, with ample opportunities for team building.

“There were many educational points and much recreation too as they got acquainted with their surroundings and integrated with the community, said Ms. Brown-Richmond.

“They learned about the flora and fauna from a local tour guide of Jamaica Hiking and Heritage Tours. They also learned to manage their resources and practice time management.

The trip proved to be an invaluable experience for the cadets to meet people from another country, and the chance to expand their horizons.

CHHS Cadet Rochelle Ebanks remarked she had never had anything close to this kind of experience before.

For CHHS Cadet Donjae Blake, the highlight of the camp was the experience at high altitudes. He overcame the cold and at times rainy and difficult ascent, to enjoy “the clouds beat across my face? at the very peak of Blue Mountain, and looking at the spectacular view below, as well as picking fruits like mangoes and jackfruit along the way.

The next Cadet trip is planned for spring.