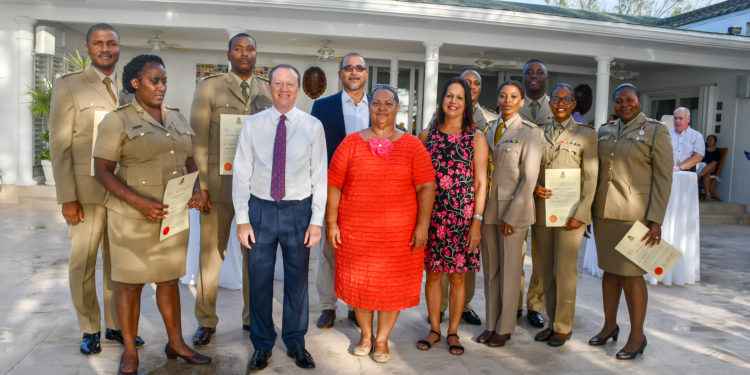 The Governor, who is also the patron of the Corps, and his wife Lissie hosted the ceremony at Government House. They were joined by Youth Minister, Hon Juliana O’Connor-Connolly, Youth Ministry Councillor Barbara Conolly, Commissioner of Police Derek Byrne, Cadet Corps Commandant Lt. Col. Bobeth O’Garro, other officers, volunteers and guests.

During the brief ceremony, the officers recited the Oath of Allegiance before accepting their commissions from the Governor. One officer, Lt. (JG) Ainsley Coley, who could not attend will receive his instrument at a later date.

Cadet Sergeant Ajuay Whittaker sang the national anthem and the national song, accompanied by Cadet Hansani Hunt on the trumpet.

Lt. Col O’Garro thanked all cadet corps volunteers, calling them “the best in the world”. She noted they held professions ranging from police officers, to teachers and nurses.

In brief remarks Minister O’Connor-Connolly described herself as a ‘cadet mom’, crediting the service of the officers and other volunteers like them with having a significant and transformative impact on the lives of the young cadets, including her own adoptive daughter.

She also said she had been particularly moved by the commitment of the entire cadet organisation to helping Cayman Brac rebuild in the aftermath of Hurricane Paloma in 2008.

The newly commissioned officers are either former military personnel or attended the basic officers training course in Jamaica.

Governor Roper noted that the cadet programme was expected to prove an invaluable training ground as the Cayman Islands moved forward with plans to form its own defence regiment.