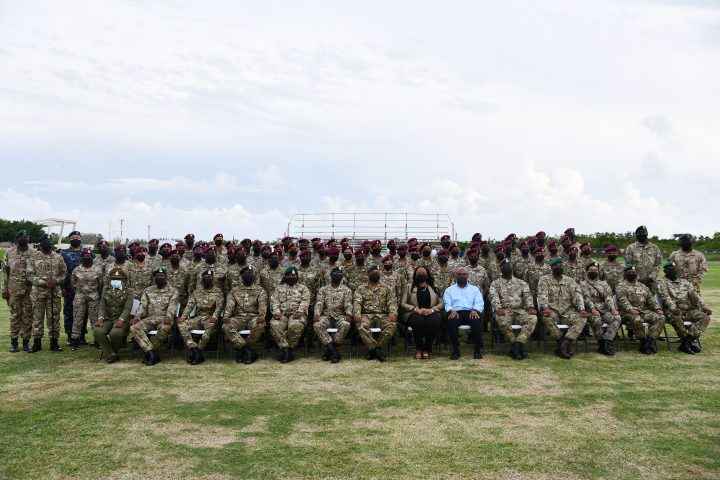 Award recipients for most Outstanding Recruit in each detachment were:

Awards were also given for:

Speaking of the new class of recruits, CICC acting Commandant Lt. Col. Errol Brathwaite noted: “We are proud of the dedication, high levels of skill and precision, displayed by our new cadets. As we prepare to celebrate our 20th anniversary, we continue to build on the Corps’ great impact on Cayman Islands’ youth and support for our nation’s wider community.”

“I would like to take this opportunity to thank all the participating schools for their continued support toward CICC development. We also extend thanks to the parents and neighbouring communities who volunteered their time and shelter during training and exercises.”

Acting Chief Officer Ministry of Home Affairs Julian Lewis said, “For the Ministry of Home Affairs, the development of CICC is part of our ministry’s commitment to youth development and mentorship of young men and women. CICC also provides a great foundation for any career in uniform services and plays a pivotal role in equipping recruits with several life skills for success.”

Minister of Home Affairs Hon. Sabrina Turner who was on hand as reviewing officer delivered remarks to the new class at the passing-out parade and graduation ceremony.

“Today marks a significant milestone in your careers as members of the Cadet Corps, both as cadets and adult leaders. I am sure there were some days you wanted to give up, but you have made it to this stage through your perseverance and the camaraderie of your peers. There is a saying that the race is not for the swift but for those who endure to the end. Success comes through constant learning and development.”

She continued, “I encourage our young people who are passionate about serving the community, eager to build leadership skills and who desire to join a highly esteemed organisation to join the Cayman Islands Cadet Corps.”

Now celebrating its 20th Anniversary the CICC continues to empower youth with the tools and life skills for personal development and growth. The Cayman Islands Cadet Corps is a key foundation for building Cayman’s resilience and national security across all three Islands for future Caymanian generations. CICC will commence its 20th Anniversary celebrations on 1 May 2022 notably with a church service.