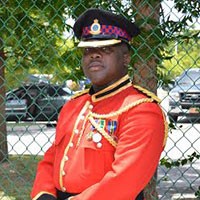 Major Henry, Regional and International Liaison Officer served as a commissioned officer in the Jamaica Combined Cadet Force for five years prior to relocating to the Cayman Islands in 2003. Maj. Henry has specialized training in teaching, psychology, and ministry to youth.

Major Henry is the first Cayman Islands recipient of the Caribbean Cadet Medal for service to the development of regional cadetting and contribution to the initiation of the Caribbean Cadet Manual. He is also a recipient of the Cayman Islands Cadet Long Service Medal, Disaster Mitigation medal for services given during and in the aftermath of Hurricanes Ivan(2004), Dean (2007) and Paloma (2008); as well as the Good Conduct and Meritorious Service Medal.