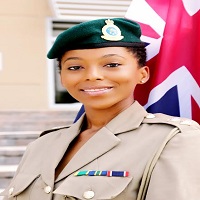 Lt. Colonel Daley-O’Garro, is employed full-time as the Commandant. She joined the Corps in 2002 as its first female officer on secondment from the RCIPS.

The Commandant is a recipient of the Caribbean Cadet Medal (CCM).

She holds a Master’s of Education in Counseling, a Bachelor of Science degree in Psychology (Major) and Sociology (minor) from the University of the West Indies, Mona, subjects that are most useful in serving the needs of today’s youth.

Lt. Col. O’Garro has also represented the Cayman Islands in the international sporting arena.  Lt. Col. Daley-O’Garro hopes to see more involvement from females within the Corps, as cadets and as adult instructors, and believes that the Corps is a great place to develop leadership skills.

Lt. Col. O’Garro is a recipient of the Caribbean Cadet Medal for her service in the development  of cadetting in the Cayman Islands. Col. O’Garro is also a recipient of the Cayman Islands Cadet Long Service Medal, Disaster Mitigation medal for services given during and in the aftermath of Hurricane Ivan, Dean and Paloma; as well as the Good Conduct and Meritorious Service Medal.